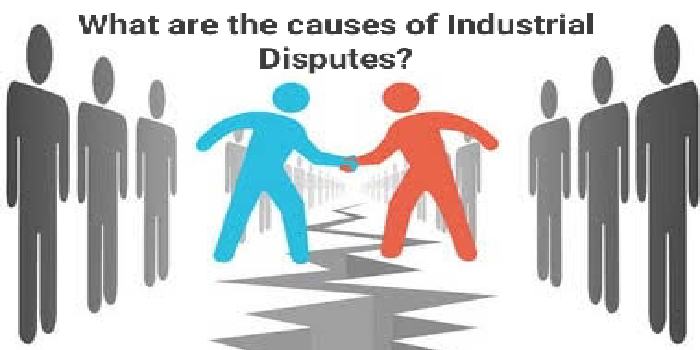 Every country has always prospered due to industrialization, employment, contribution to national income, per capita income, exports, and economic development on one side and industrial disputes on the other. It has always been mixed with each other. Industrial disputes happen due to a conflict of interest between management and labour.

The main goal of management is profit maximization. The workers also expect a rise in income, job security, protection of their skills, improvement in their status, and working conditions.

The industry owners who control the factors of production require strict administration, closer supervision, and maintenance of strict discipline and implementation of rules, code of conduct, and code of discipline.

Whereas the industry workers demand a share in capital, voice in management, freedom of expression, participation in management, and employee dignity. So the people who control the factors of production and people that produce always have different or conflicting interests give results to industrial disputes.

Every person who works in industry has certain requirements/needs, e.g., economic needs, social needs, security requirements. When these requirements do not get satisfied, a conflict arises between the worker and the employer. Interest disputes are also called disputes of interest or economic disputes. These disputes arise from the demands or proposals for increment in wages, benefits, job security, terms, or employment conditions. Interest disputes must be properly negotiated or bargained or compromised, and economic power should not be tested as far as possible. These disputes should be settled through accommodation as soon as possible.

Grievances or Rights Disputes are also known as conflict of rights or legal disputes. These kinds of disputes take place from day to day working relations in the workplace. It is just like a protest by the workers against the act of management that improves the rights of the employees.

If grievance disputes are not sorted out according to the procedure which is accepted by the parties, it often results in disturbing the working relationship between the management and employees. The government also encourages voluntary consideration for this type of dispute settlement.

The most common Labour type of dispute is the disputes over Unfair Practices in industrial relations. Most of the times The management discriminates against workers on the ground that they are the members of the trade union and they participate in the activities of the union.

Unfair labour practice includes activities like pressure on employees when they exercise their rights to organize, take part in union activity, refuse to bargain, recruit new employees during a strike which is not illegal, create an environment, or actually create an act of force or violence or stop communication, etc.

These kinds of disputes can be settled through coordination or according to the normal procedure laid down under the Industrial Disputes Act 1947.

This also happens when there is already an existing trade union, or it is a case of multiple trade unions, and each wants to get recognition. Recognition Disputes also arises when a particular trade union does not have sufficient representatives.

Recognition disputes are settled through the government’s guidelines for recognition of trade union or with the help of the Code of Discipline, which has been laid down by the government.

Now we will discuss the causes of Industrial Disputes. 1. Low income: As India’s prices and living expenses are rising, employees also expect their income to rise. Unfortunately, it happens very rarely. There is only one earning member in the household, and this person alone supports everyone financially; this situation ultimately makes it worse.

Most of the time, the income is not enough to keep everyone content and pay all the bills. Thus, if the earning member loses his/her job, the entire family suffers in poverty. Low wages cause discontent in employees.

2. Inflation: Prices in India are constantly rising, hence, it is also expected that the income of industrial labourers increases, but that never happens.
The middle class or the lower class often can’t survive with such high inflation.

5. Leave without pay- Employees find it extremely difficult to get leave with pay. The system of maternity leave is also rare in most places.

6. Self-Respect of Employees- Employees are becoming more and more conscious about self-respect. Their Tempers flare when they are insulted or instigated by their superiors. Their ego hurts very easily.

7. No bonus for employees- Most of the time, extra bonus is not paid, or not paid on time. This causes industrial conflicts.

8. Firing of employees- Sometimes, employees are unfairly relieved from their jobs. Nevertheless, their colleagues unite and fight for the rehiring of their relieved colleagues.

9. Unrecognition of trade unions- Sometimes, trade unions are not recognized by industries, then it results in strained relations and stress.

10. Replacement of workers – Replacement of Workers by machinery causes discontent. Workers are getting laid off and replaced by cheaper machines that do the same work.

11. Involvement of Political Party- Many industrial disputes are being caused by political parties. Political involvement in trade unions causes divisions and unnecessary tensions.

These are the causes of Industrial Disputes.

1. Tension among employees- Unrest and unnecessary tensions engulf the hearts and minds of all the people that are involved – labourers and senior management.

2. Conflicts- There is economic loss due to conflicts because conflicts may result in strikes and lock-outs. This causes low or no production that results in an industrial loss.

3. Industrial losses- Industrial Losses may cause economic depression because many industries are interlinked. A problem in one industry may drastically affect another industry.

4. Joblessness– The lives of low-level laborers become worse when they are out of work. They may be the only working members of the family, and their joblessness may lead everyone in the family to poverty.

Impact of Industrial Disputes on Economy: It is a shameful thing that even though we have borrowed western industrial methods and organizations, the machinery devised in the west to ensure good industrial relations or at least tackle violent industrial disputes has not been utilized in this country with many useful results.

The result has been that the strikes have become very common in India that it causes a serious economic injury to employers and workers alike and inconvenience to the public. The net result of all strikes and lockouts that have occurred during the last three decades, the privations of the workers, the diminution of output and profits for industries, the inconvenience to the general public, and the atmosphere of mutual distrust and suspicion which they leave behind between the workers and the employers, the consideration of the methods for the prevention of the industrial disputes and the settlement when they do arise must be deemed urgent.

It is true that the net contraction of output consequent upon industrial disputes is generally smaller than the immediate contraction; for a stoppage of work at one place may lead both to more work at the same time in rival establishments and to more work at a later time in the industry where the stoppage has occurred.

It must also be admitted that, on some occasions, the direct damage caused by strikes and lockouts is partly compensated by the stimulus indirectly given to improvements of machinery and in the organization of work.

On a broad view, this hypothetical gain is altogether outweighed by a certain loss of production in the industries directly affected and in related industries, the raw material of which is cut off, or the product of which cannot be worked up into its final stage.

Moreover, there may be a lasting injury to the workpeople, in industrial careers interrupted a load of a debt contracted to meet a temporary emergency and permanent damage to their children’s health through the enforced period of insufficient nourishment. The extent of these evils varies, of course, partly with the degree to which the commodity, whose production is stopped, is consumed by the poorer classes and partly with its importance for life, health, security, and order.

But in any event, the aggregate damage with which industrial disputes threaten the national dividend is very grave. Hence, the eagerness of social reformers is to build up and fortify the machinery of industrial peace. To prevent industrial disputes, there are three measures which are as follows :

Now we will discuss the need for preventing industrial disputes and preserving industrial peace. Also, that prevention is better than settlement.

There is also preventive machinery that directly or indirectly contributes to the improvement of industrial relations and in preventing industrial disputes.

More measures which can be used to prevent the disputes are –

There are two important arrangements made in the prevention of industrial disputes: work committees and joint management councils.

As per the provisions of the Industrial Disputes Act, 1947, organizations employing 100 or more persons have to set up works committees at the unit level. There are an equal number of representatives in these committees from the workers to the employers.

These are consultative in nature and are also called the most effective agency for preventing industrial disputes.

1. In their day-to-day work situation, they have to remove the cause of friction.
2. Create more amity and harmonious relationship between the parties.
3. Creating an atmosphere for the settlement of the disputes.

In India, the joint management council (JMC) came into existence due to the provisions in this regard made by the Industrial Policy Resolution, 1956. To infuse the spirit of cooperation between the workers and the management, these councils were set up.

(i) Scheme (voluntary one.)

(ii) The number of representative workers and employers are equal, which can be minimum and maximum  6 and 12, respectively.

(iii) This council deal with matters like information sharing, consultative, and administrative.

(iv) Unanimous decision is made by JMCs.

If we talk about India, in India,  the pioneers to introduce the JMC scheme are industrial units like Hindustan Insecticides, HMT, Indian Airlines, Air India, in the public sector and TISCO, Arvind Mills, Modi Spinners, and Weaving Mills.

Wherever the JMC schemes have been set up, there have always been better industrial relations, a more satisfied workforce, increased productivity, better profits, etc.

To regulate industry relations – is the main goal of this organization. The term ‘Standing Orders’ stands for rules and regulations, which are according to the conditions of employment workers.

The first legislative enactment was formed in the Bombay Industrial Disputes Act, 1932, which accidentally sought to regulate the making of standing orders.

The act for recognizing the need for the standardized conditions of employment in factories to develop industrial peace in the country was passed in 1946.

After the certification of standing orders, the binding is made between the employees and the employers. Violation of Orders mentioned therein invites Penalties. The Industrial Employment (Standing Orders) Act, 1946, as amended from time to time. The recent amendment was made in the Act in 1982.

Some FAQs related to Industrial Disputes:

Q.1 How do unions get bargaining rights?

Ans. The right to collective bargaining is the right of individual employees in a workplace to come together and choose a representative. It is based on a majority vote, who will negotiate with their employer over terms and employment conditions.

The individual worker typically lacks meaningful bargaining power to negotiate favorable employment terms; designating a representative to negotiate on behalf of a large group of workers can level the playing field between labor and management and give workers a meaningful seat at the bargaining table.

Q.2 When can a union apply for certification?

Ans. A union can only apply once every 90 days for certification for the same group unless the Board gives consent. If the employees are on strike or they are locked out, the union must obtain the Board’s consent to file a certification application.

Q.3 How can a trade union and an employer receive assistance in settling a grievance?