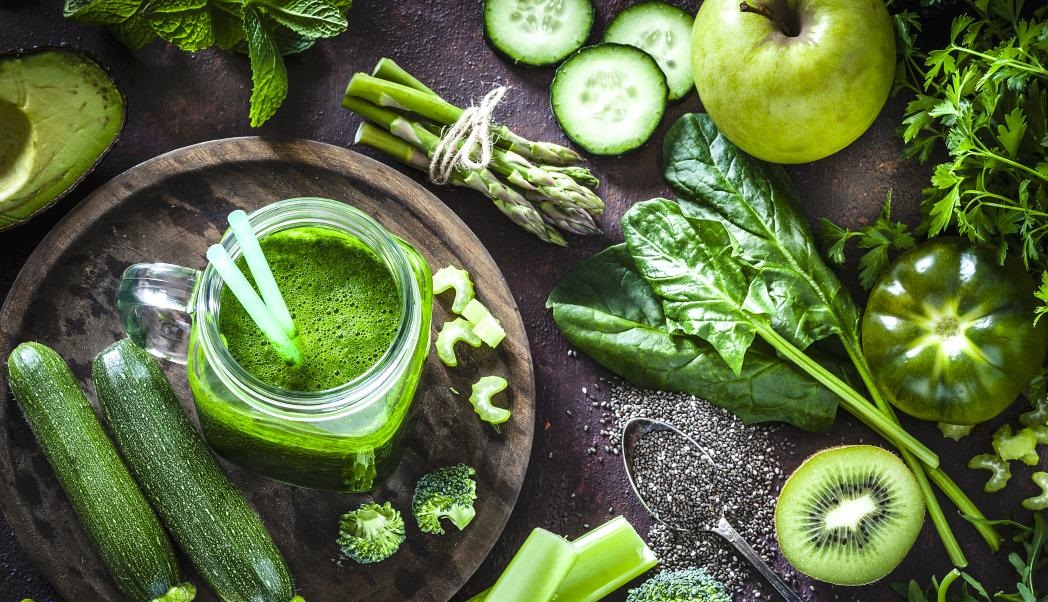 You always hear the reference to the word “chlorophyll” when talking about plants. However, not everyone knows what it means exactly. Reading this article will make it clear to you.

Chlorophyll originated from the Greek words’ khloros’, which means green, and ‘phyllon’, which means leaves. It is a family of pigments responsible for giving plants their characteristically green color. This biomolecule can be seen in plants, different types of algae, and sometimes even in types of bacteria.

Why is chlorophyll green?

Its perceives sunlight at blue and red wavelengths. But it only gives out green color. Hence, most nature that we often see around us is mostly green in color.

People ask a very common question: Why do plants lose their green color in autumn? It’s simply because plants require a sufficient amount of sunlight along with warm temperatures to produce Chlorophyll. Due to the shortage of these factors in autumn, the low production of chlorophyll results in the plants losing their green pigmentation.

Role of Chlorophyll in Photosynthesis

All the organisms that carry out the process of photosynthesis have “chloroplast.” These are cells that can convert light energy into chemical energy during photosynthesis with the help of Chlorophyll.

It plays a very vital role in plants. This is because it draws in energy from the sun and helps in photosynthesis. It produces energy and breathes from the oxygen and carbohydrates made out of the water and carbon dioxide coalescence.

As mentioned earlier, it is a family of pigments, so there are different types.

This pigment is found in the highest concentration in most plants. It is the most vital pigment used in photosynthesis. It is also found in some algae, cyanobacteria, and anaerobic phototrophs. It perceives violet-blue and orange-red lights and reflects blue-green colored light.

This pigment can be seen mostly in green algae and plants. It carries out a supporting function in helping Chlorophyll in photosynthesis. This pigment normally takes in orange-red light and gives out a yellow-green color.

It is normally found in marine algae, but you can sometimes also find it in brown algae, Diatoms, and Dinoflagellates. It is a rare pigment with a subjective rate of absorbing lights.

This is another rare pigment found in golden algae. Most species of Tribonema bombycinum and Vaucheria hamata have this type. Information about it has been very scarce since it was recently discovered.

It is mostly seen in cyanobacteria and other microorganisms producing oxygen. It absorbs wavelengths of light that cannot be harvested from the other types.

Chlorophyll can transform light energy, which is why it is directly involved in the light reflection process of photosynthesis. On the other hand, the b type can only take in light energy but eventually passes it on to Chlorophyll a. This is why we find the “a” type most predominantly in nature.

Is Chlorophyll good for you?

Chlorophyll is vital to plants, algae, and some bacteria. But not only do these organisms benefit from it. Its benefits extend even to humans ingesting it. Several studies have discovered its benefits for human health. They have revealed that it helps the function of certain vital organs such as kidneys and certain systems such as the immune and digestive systems, among others.

Among its many benefits the following stand out; it helps the flow of blood in the body and increases its production.

It improves the defenses thanks to its ability to alkalize the blood. This slows down the development of viruses and bacteria.

It protects the liver, stomach, and bladder. This is how it improves the general health of the digestive system and the elimination of common problems such as bad breath and heavy digestion.

What does Chlorophyll do?

It is undoubtedly one of the essential natural pigments for us. Autotrophic organisms that produce their food like plants cannot do so anymore. It is well known that plants are an important part of our ecosystem since they are natural producers.

They should be called producers because they make use of inorganic compounds with the help of sunlight to produce their food. They do this through photosynthesis. That is why they are called autotrophs.

The appearance of organisms millions of years ago, with the ability to use the energy taken from sunlight, is suspected to be the reason for the existence of all the photosynthetic life on our planet today. The theory that describes their emergence is called Endosymbiotic Theory.

What is Liquid Chlorophyll?

It can also extend its benefits to your body and wellness. It contains vitamins, antioxidants, and many medicinal properties that can be essential to your well-being. The intake of Chlorophyll can either be through plants or by taking supplements.

Liquid Chlorophyll or chlorophyllin has benefits that can help humans in various ways. However, there isn’t enough research to back all these medical claims. Here are some of its benefits:

Many influencers have laid claims about the weight loss ability of liquid Chlorophyll. There is not enough studied evidence to back this claim. However, a study in 2019 showed that overweight women who consumed a different form of chlorophyll supplement experienced noticeable weight loss compared to the ones who did not consume it.

Chlorophyllin is known to have reduced trimethyl amines in people suffering from trimethylaminuria disorder. It is a disorder where the person suffering gives out a fishy odor.

Research also shows that Chlorophyll can eliminate the foul smell of some wounds by acting as a natural deodorizer. After more research and studies, it was also added to ointments, normally used to clean wounds thoroughly. This helps to lessen the inflammation around the wound and strengthens the healing process.

It has numerous benefits and is easy to consume. Here are some answers to people’s doubts about consuming Chlorophyll.

Does Chlorophyll help with acne?

A small-scale research program in 2015 handed out a face gel to 10 patients with acne and enlarged pores for application. The gel contained sodium copper chlorophyllin. Three weeks later, the results were significant, and the conditions of the patients were highly improved. There were also no signs of side effects.

Another similar study was carried out in the same year on patients with sun-damaged skin, and the results were positively similar to the first study.

Can you drink Chlorophyll?

Ingesting it through liquid supplements has proven to be more effective. That is because once it enters your digestive system, there are chances that it won’t sustain itself until the absorption.

This pigment in the form of liquid supplements is called chlorophyllin. It consists of copper and not magnesium. Once you take these supplements, you can detect the copper in your plasma. It is a sign that the absorption has happened.

Chlorophyll and chlorophyllin have similar properties.

Where to buy liquid Chlorophyll?

Liquid Chlorophyll or chlorophyll water is to be taken orally. It is also called chlorophyll liquid or chlorophyll drops. It is normally available in liquid form or as a powder that can be mixed with water or juice. It is easily available and can be bought in food stores, health clinics, and even online.

You will also find it powdered form mixed with greens such as spirulina, wheatgrass, and chlorella. The supplements are, however, unregulated. So you should only opt for the products that have been tested before by third parties for safety and purity.

Here are the 5 Best Liquid Chlorophyll

Peak performance has declared its product to be the best form of Chlorophyll available. The company says that these chlorophyll drops are very good for internal health problems like digestive and immune systems.

People mostly prefer drinking chlorophyll water. For that, just mix this product with water. Three drops of Mary Ruth’s Chlorophyll in every dose can put an end to bad breath. It’s even more effective because of Gastroesophageal reflux disease (GERD).

This supplement has three distinct qualities. It has chlorophyllin that helps with quick absorption.

The company emphasizes “chlorophyll for weight loss” as their hard at work product helps the buyers regulate their diets. It also boosts your immunity and strengthens it.

This product comes from the mulberry leaf and has 50 milligrams(mg) of Chlorophyll. You can also buy it in capsule form if you find that easier to consume. The manufacturer has also added a mixture of superfoods to make it a strong antioxidant.

The product is guaranteed to be completely natural without added flavors and chemicals.

Is Chlorophyll safe to drink?

Liquid Chlorophyll is not poisonous and can be consumed in various forms. However, there can be potential side effects to it. One of the risks includes copper toxicity. Since a usual serving contains more copper intake than is recommended, the risk of copper toxicity cannot be eliminated.

Chlorophyll is found in plants and can be taken as a supplement in liquid, tablet, or powder form. It may have internal and external several healing properties. However, due to limited study, all these claims are not guaranteed. The claims can be made absolute only after conducting more research.

1] What does Chlorophyll do in your body?

The brands that supply Chlorophyll in the form of drops or tablets claim that their products have natural healing abilities. Some of them include cancer prevention, immunity boost, and enhanced digestive system.

2] Is Chlorophyll good for humans?

Consuming Chlorophyll in the right quantity has been beneficial by many people. It has skin-treating properties too. It helps the human body both externally and internally.

3] What are the 4 types of Chlorophyll?

Chlorophyll is divided into 4 types; they ‘a’, ‘b’, ‘c’ and ‘d’ types. It is found mostly in plants, algae, and certain types of bacteria.

4] What are the side effects of taking Chlorophyll?

Consuming Chlorophyll in more than the recommended (100-200mg) quantity can be risky and cause symptoms like vomiting, sweating, stomach ache, diarrhea, etc.

The answer to this question is no; it does not absorb green light but instead reflects it. That is why plants with this pigmentation are green in color.

6] How much Chlorophyll per day?

The Food and Drug Administration(FDA) recommends about 100 to 200 milligrams for adults and children who are more than 12 years of age but not more than 300mg.

7] Can liquid Chlorophyll be refrigerated?

Yes, it can be refrigerated. But it is recommended to refrigerate the supplements only when not in use.

8] Should I take Chlorophyll on an empty stomach?

It is not advisable to take Chlorophyll on an empty stomach. It can also lead to minor side effects like nausea, vomiting, and diarrhea.

Chlorophyll is naturally beneficial in boosting the immune system and has many benefits. Therefore it is safe for consumption by anyone, even kids. However, the consumption should be within 100-200mg.