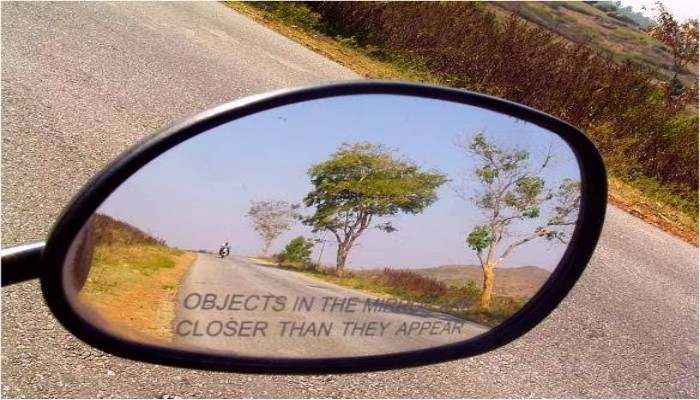 What are spherical mirrors?

A spherical mirror is the one whose surface is either concave or convex and forms a part of a true sphere. Concave and convex are the two different types of a spherical mirror. The most common examples of concave mirrors include shaving mirrors and makeup mirrors. These mirrors are used in everyday life, and thus their purpose is quite common. They help in magnifying objects placed close to them.

The most common examples of convex mirrors include the passenger-side wing mirrors of cars. The convex mirrors have wider fields of use as compared to equivalent mirrors that are flat, but objects that appear in them generally look smaller (and at a farther distance) than they actually are.

The first spherical mirrors in human civilization used were mostly like pools of dark still water or water collected in a primitive vessel (or utensil) of some sort. The earliest manufactured mirrors used by humans were pieces of polished stone, for example, like that of obsidian, a naturally occurring volcanic glass. The obsidian mirrors found in Anatolia (now popularly known as Turkey) have been dated to around 6000 BC. Mirrors of polished copper were crafted early in the Mesopotamian civilization from 4000 BC and in ancient Egypt from around 3000 BC as well.

The history of spherical mirrors in human civilization is not just limited to those areas. Polished stone mirrors have also been discovered from Central and South America, that date from around 2000 BC onwards. Bronze mirrors were manufactured in China from around 2000 BC. Some of the earliest bronze and copper mirror examples include the ones produced by the Qijia culture.

Glass mirrors coated with metal are said to have been invented in Sidon, modern-day Lebanon (in the first century AD). Glass mirrors backed with gold leaf are debated by the Roman author Pliny in his NATURAL HISTORY, which was written in about 77 AD. The credit for the development of the technique for creating crude mirrors in the history of spherical mirrors in human civilization goes to the Romans. They used to coat blown glass with molten lead.

The parabolic mirror was mentioned and studied in a classical period by the mathematician Diocles in his famous work: On Burning Mirrors. A number of experiments were conducted by Ptolemy on curved, polished iron mirrors. He discussed all types of mirrors- plane, convex spherical and concave spherical mirrors in his Optics.

In the 10th century, parabolic mirrors were also discovered by a physicist named Ibn Sahl. Ibn al-Haytham, a famous mathematician of his times, debated on concave and convex mirrors using cylindrical and spherical geometries. He carried out many experiments on the same and discovered the point on these mirrors at which a ray coming from one point is reflected another point. By the 11th century, clear glass mirrors were started being produced in Moorish Spain as well.

People began making mirrors with the use of silver-mercury amalgams in China around 500 AD.

The time of the Renaissance also forms part of the history of spherical mirrors in human civilization. During the early Renaissance, manufacturers of Europe perfected a better method of coating glass with an amalgam of tin and mercury. However, the exact date and location of the discovery still remain unknown. In the 16th century, a city was famed for its expertise on glass-making: Venice. It became a centre of mirror production just after the new method was discovered. Ever since this period, the glass mirrors were then considered among expensive luxuries.

Founded by royal initiative in France, The Saint-Gobain factory was an important manufacturer of spherical mirrors. The Bohemian and German glass (which were comparatively cheaper) eventually also made an entrance in the history of spherical mirrors in human civilization.

In 1835, the invention of a silvered-glass mirror was credited to Justus von Liebig- a German chemist. This invention process involved deposition of a thin layer of metallic silver onto glass, which was in turn through the chemical reduction of silver nitrate. The process was then later adapted for mass manufacturing and led to increased availability of mirrors at affordable prices. In recent times, mirrors are produced by the wet deposition of silver directly onto the glass substrate. Sometimes, a deposition of aluminum via vacuum also is used for the production of mirrors.

In the present date, spherical mirrors are mainly used in these two forms. Let us now discuss them in detail.

What is a concave mirror?

A hollow sphere is cut with its outer surface painted; the inner part then acts as a reflecting surface (mirror). A mirror with such features is called a concave mirror.

When light strikes any point on a concave mirror, it converges at the point after striking and reflects back from the reflecting surface of the mirror. This is the reason why it is also known as a converging mirror.

Details on Image formation by a concave mirror

Formation of different types of images by a concave mirror is possible by changing the position of the object from the mirror. The varied positions (from the mirror) from which different size of the image can be obtained are:

What is a convex mirror?

A part of a hollow sphere being cut and painted from inside, its outer surface then becomes the reflecting surface and a mirror with such features is called a convex mirror. Also known as a diverging mirror, a convex mirror diverges light when it strikes on its reflecting surface. A virtual, erect, and diminished image is always formed when light strikes the convex mirror, irrespective, no matter what the distance between the object and the mirror might be. Among other applications, a convex mirror is also used as a rearview mirror in vehicles.

Details on Image formation by a convex mirror

Some of the uses of spherical mirrors are listed below:

1.Rearview mirror- The mirror of the cars for side view form a small and erect image with the help of convex mirrors. These mirrors thus help in keeping a watch on the way behind the car while driving.

2. Security mirrors in ATM- The security mirrors are kept near the ATMs. This helps  the bank customer to check whether somebody is behind them or not.

3. Satellite dishes- One of the essential uses of a concave mirror is satellite dishes. They receive the weaker signals sent from the communication satellites in space and then amplify it.

4. Headlights in a car- A powerful source of light in a car is kept at the focal point of  a concave mirror in a smaller space at the back of the headlight. Due to this, any light striking the mirror from the focus gets automatically reflected parallel to the axis of the concave mirror.

The history of spherical mirrors in human civilization is phenomenal if you study it closely. It took a series of events for its evolution and even more, for discovering its use in different fields.

Still or dark water collected in a vessel was considered or used as mirrors by ancient people in the ancient ages. Then with passing days, obsidian mirrors came into existence. Followed by metal-coated glass mirrors, this led to the discovery of metal coated spherical mirrors. Parabolic mirrors were then discovered in the mid-ninth century by two people- Ibn Al Haytham and Ibn Sahl. These were described in classical antiquity in the form of one of the books written by a mathematician named Diocles. In addition to these researches, Ptolemy also did a lot of experiments with curved, polished iron mirrors and has mentioned about convex and concave mirrors in his book named Optics.

4 thoughts on “History of spherical mirrors in human civilization”